Fortunately for The Mimik he was able to participate back to back almost, this month in two artistic events.

The first event was known as “Storming the Gates” located in Trenton, NJ. This is where local businesses up & down the streets offer the front of their stores protective “gates” to be decorated by various artists. Luckily the Mimik was given a nice flat medium/large sized wall instead! The wall originally or formally was “buffed” a nicely, lightly, saturated, rosy pink. There was previously a ‘heart’ drawn on the wall. Most likely from a local sending a message across so The Mimik made due by adding to the message. Hopefully nobody was ‘broken hearted’.

The next event was Colorest Art Supply Graff Battle 2013 located in Redbank, NJ. Artist names were dropped into a hat to be randomly selected by an artistic individual. That individual, who ever’s name one pulled out from the draw was the centerpiece that had to be created.

The Mimik grabbed his cans & pulled the artist named THEN who later turned out to be the events second place winner.

Unortunately neither The Mimik or his fellow FRESHman ElanWonder were able to place this time around. Maybe next year. Thanks to Kasso in Trenton & Colorest for putting on & sponsoring their events. 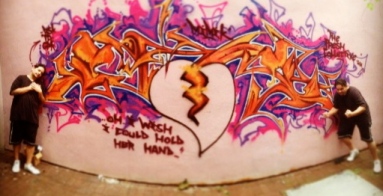 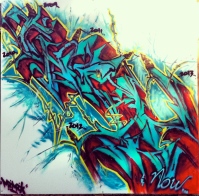